Then I realized you can't "boycott" something that's Free (they can hardly afford to pay their writers) but I can avoid their parties.

Last night I went to a Vice Party/Concert at Black Hole, a horrid club known for tacky lazer lights and fascist door security.

The last time I went to BH was two years ago, when I was chased down the street by security via trying to escape through the back door without paying (didn't know the back door had alarms about as loud as Oprah announcing her guests).

I didn't know I was going there yesterday until I was asked to step out of the cab. (I let my friends take me around blindly as long as they pay for the ride).

When we arrived, My Friend pointed out the Rapper scheduled to perform (duh the only black guy there) and suggested I ask if he wants our non-existant drugs so we can take his money and go.

I told the Rapper I worked for Rolling Stone and wanted an interview. I asked him questions and pretended to type his answers into my shitty Nokia phone. I'm not sure what we actually talked about but I do remember him saying at one point that he noticed the "Older Italian women don't seem to give up." Whatever that means.

I asked him if he needed a drug dealer and/or would be willing to leave about 1,000 Euros with me. He said he'd let me know.

Then I pretended to take a pictures of him until I ran out of batteries.


When the show started I thought it appropriate to go on stage and dance in my leotard. (I was their drug dealer, after all)!

The bouncers seemed upset and told me to get down. "NO Way," I thought. I hadn't finished my "Born This Way" routine! I blew them a kiss and offered a beer, hoping they'd leave me alone.

One thing led to another and eventually I was thrown into the street like a common loser ("DON'T YOU KNOW WHO I AM?!").

Not only am I emotionally scarred (don't make me question my dancing) I also have a bruise on my pretty little arm thanks to one of those Merdas thinking it's OK to treat a Lady badly just for trying to have fun in a city absolutely devoid of it. 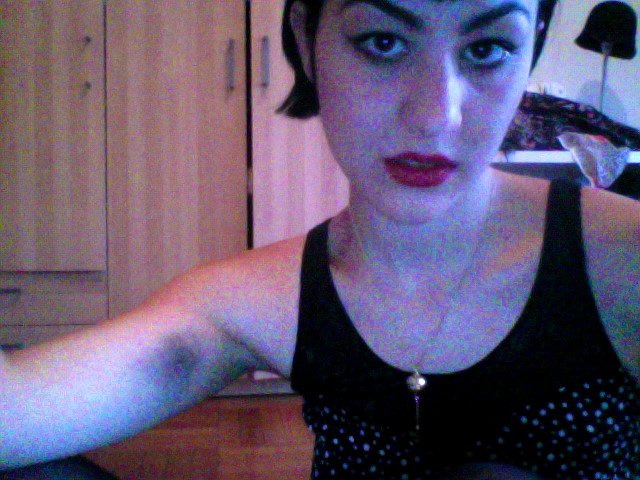 I'm not attending another Vice party until I am formally apologized to, sent flowers and/or given those 1,000 Euros I had asked for in the first place.
Posted by Tea at 8:59 PM