So I'll just go ahead and tell yall that I'm in an Abusive Relationship.

It started a few years ago when I saw a ringtone commercial for "Disco Stick." Was this that Gaga woman I had head about? I was behind via living in 3rd World Italy but could see from the clip that we were meant to be.

I looked her up on some underground music blogs (perezhilton.com) and saw we had a ton in common. She didn't wear pants, was sexually brash 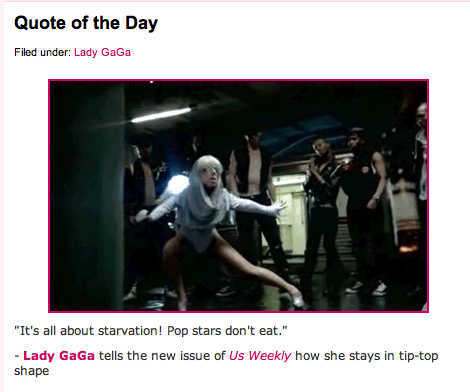 I fall in love easily but with her it was instant.

Her first album came out that spring. I arrived at the store before it opened because I was expecting a long line (waiting alone, I realized I may as well be living in Afghanistan). I got the Very First Copy from the Fnac store on via Torino.

Like with any new love, we got along great. We shared boys, fame and money, took lots of drugs and often danced. It was The Perfect Relationship-at first-but even lovers can become boring. Things I once found cute became annoying and what used to be fun put me to sleep. So like in any relationship, I started cheating.

I went back to my favorite Exes; Nico, the depressed one, Brody, the violent one and Britney, the psychotic.

I felt dishonest but couldn't stop.

Luckily she noticed my infidelity and came out with her second album. This one turned gloomy, just like our affair. We still danced, but now in the dark. We still had boys but they were possessive. We saved our romance but it was bad.

This new phase in our love held strong until the abuse started, almost suddenly.

It's hard to say how or why a relationship turns abusive. It can be due to neglect, anger, disappointment (on my part) or carelessness (on hers).

Either way, we had problems.

I used to love her interviews via her always talking about her vagina or "rather dying than not wearing heels." She was brilliant, hilarious and FUN. So why did she turn political?  It's like dating a junkie who decides to get clean, or a rich guy who donates his wealth. Like, I understand the gesture but WHAT ABOUT ME.

Should I start caring about religion now?
And what the hell is AIDS?

In questioning her I began to question myself, which is something I find unbearable. I hoped going to her concert would solve this but unfortunately (and for reasons I don't want to discuss) the only good part of that night was before the show when I was drinking alone in the parking lot and yelling at the Italians for not dressing up.  I've blocked the rest of it out of my memory.

I knew things would never be the same.

I feel betrayed and begin to lash out.
I talk shit behind her back.
I delete her from my iPod.
I start looking for someone new.

After a few months it's as if we were never together at all.

Then Tuesday night (weekly McFlurry Meeting at McDonalds) my friend asks me if I heard her latest album.

Why is Make-up Sex the best? Is it because you missed the person or because you can let your anger out on them without seeming like a freak?

We may not agree on everything. I may hate her in a month. But love is forever and when it's there you've got to fight for it no matter what.
Posted by Tea at 1:27 PM