I started writing this blog during my first year in Milan when I had no friends, went drinking alone, was depressed and cried all the time. My life hasn't changed much since then, which is why I've always had the time to keep posting stuff about nail polish, Lady Gaga and boys who don't want to date me.

Now that I'm in London and actually speaking to people rather than my television and going out for more than a McFlurry you'd think I'd have something intersting to say for once but I feel like seeing what I'm doing in print will make me realize it's not as cool as I think it is--kind of like when you plan an outfit, lay it out on your floor, put it on and feel fabulous, only to realize a few hours later you aren't watching Roseanne, you're just looking in the mirror.

Anyway. I asked yall for some advice and the best suggestion came from Daytona.

I met Daytona via the internet (duh) and became obsessed with him immediately. His beautiful self-portraits and bitchy statuses (statii?) gave me a reason to get out of bed and the inspiration to starve myself until I fall through sidewalk vents (which I'm obviously still working on). I eventually met him in Paris, where he took me to Starbucks and later ditched me for some guys who offered him a job at CK (scam). I haven't seen him since then but we keep in touch sometimes via me hacking into his profile and writing messages to 16 year old boys. 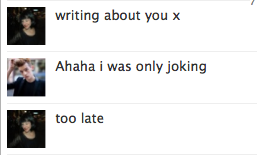 I took "Intro to Psychology" my Freshman year at Appalachian State University--meaning I read the back of a bucket of KFC on my way to my boyfriend's meth lab--so I'm going to do a bit of psych analysis on Daytona, so we all get to know him better.


Exhibit A: Profile Pictures
A person's personality is displayed through their prof pics. I have like a thousand in which I either look like a tranny or a crackhead or both, which means my personality is confused and psychotic. Daytona, on the other hand, is level-headed and pure because his pictures are simple and sparse:

He obviously takes pictures of himself all day (with that bone structure who wouldn't) however he knows how to "get down to the basics," which is good because it means he probably keeps his apartment clean via throwing everything away.

Either that or he decided he looked fat in his old ones and deleted them before I could screen shot.


Exhibit B: Comments
A person's comments represent their behavior.

Unfortunately all of his comments are in French which means his behavior probably has a lot to do with baguette-eating, acting sad and trying to grow a moustache.


Exhibit C: Status
A person's FB Status is the window to their soul, ego and subconscious.

I have no idea what this means but he mentions Ossama Ben Laden (SP?), Alexander McQueen and Prince Williams in the same sentence, which means his soul is soiled, his ego is huge and his subconscious wants to be a princess (who doesn't).

Exhibit D: Activity
The physical and mental health of an individual are directly related to activity. 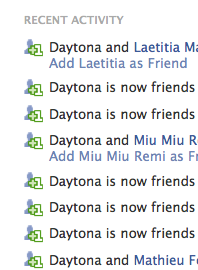 Daytona makes a lot of friends which means his mental health is strong enough to hold the weight of other people's problems but his physical health is lacking because people are exhausting.

On that note maybe I'm excited about going back to Milan. At least I'll be alone and able to find a new Facebook Obsession.
Posted by Tea at 9:13 PM