The US Elections are coming up and times like these are hard.

Hard to know who to trust with your reproductive rights, your money problems, or your physical health. It can be scary. But I'm here to help.

Let's face it, yall: Teenagers know everything.
They're tortured, anxious and ahead on every trend, ranging from fashion to tumblr. So it's no surprise that I turned to a Euro Teen Queen for some current advice-specifically about Online Dating.

Recently financial-relationship dating sites have been all over the news. Seems like people wanna cut out the bullshit and just make it clear they only want you for the bucks-lucky for them, there's tons of people willing to pay for love (just make sure it's mutual so you don't end up with jackass here).

Anyway, my friend, who will go by the name "Sina M." has been working dating sites for all they're worth-finding suckers on OKCupid and taking them to Skype, sometimes getting money and sometimes falling in love-with that money.

I ask her the deets and she shares some of her impressive convos:

"What do you look for in an internet man?"

"I can turn pretty much everything/everyone into an object of worship; my fetishes from the past include red beards, French choir boys, doctors, sk8er bois, Russians, anything including authority (teachers, etc)."

"Hot. So who do you usually meet?"

"I met with two guys from my city on subsequent saturdays, I emptied both their house bars and tried to explain why I'm actually not sexually interested in them the next morning. I met some cool internet friends on OKC who were definitely worth signing up because they are sooo inspiring/complementing spirits. I have some unrequited transatlantic crushes. I signed up in a fetish forum a while ago (dominant teen girl nom de plume: Kitty Kapow) but all I got were requests to make videos of crashing matchbox cars with my feet." 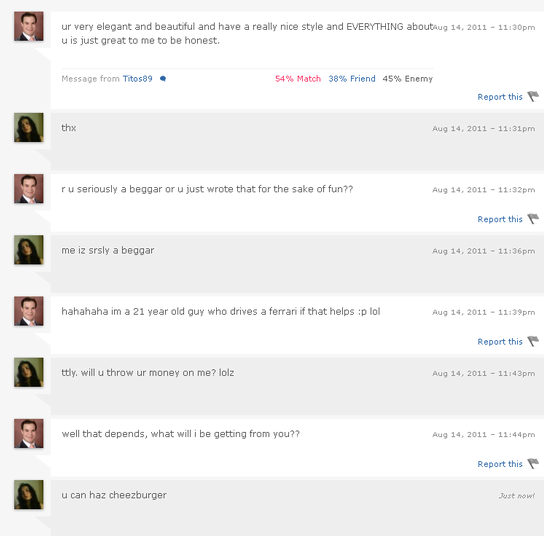 "Actually I'm just broke. Once I had a German pen pal who gave me money. I was 14-16 and it was on an absolutely non-sexual basis; I presume he tried to "buy" my friendship. It was pretty cool."

"I looove when people do that! Sounds like a lot of this is "unromantic"- is there anyone you're actually interested in?"

"I met a 38 year old guy from the US for whom I may become an Au Pair/clean and help him get new customers for his mushroom selling business, unfortunately I can't afford the plane tickets :( We skype sometimes but it's tough because of the time zone difference. Maybe I should earn some money doing dom stuff-I was in contact with one from my city, but she said she won't take me till I'm at least 21."

"At least there's no age limit to manipulating men."

"I'm not sure; I'm often blamed for being a tease, and as long as I'm young enough I (unintentionally) try to work this Lolita thing out, I guess."

"1- Obviously, avoid eating on a first date, especially not tricky stuff like spaghetti. Avoid movies, as well. 2- Choose your underwear wisely. Ugliest cotton pants from the very back of your drawer if you want to remind yourself to avoid getting laid when wasted; lingerie for the aesthetics. Also, pantyhose vs. suspenders-even in winter try to keep in mind that sexyness is more important than UTI. 3- Bring out the booze. 4- Don't talk about former dates. Act like you just life for the moment and you'd never dare to compare him to any other men (LOL). 5- Have a plan up your sleeve just in case he's a total drag. Like your friend giving birth or something."