Wow guys, what a weekend! This Men's fashion week proved to be pretty LOLZ and I'm here to tell y'all why :@) It all started via my ~Super Mood~ on Friday I had via nailing five exams last week and feeling really ~accomplished~ and whatever and anyway any weekend that starts with Total Look Leopard Print can't go wrong AMIRIGHT? 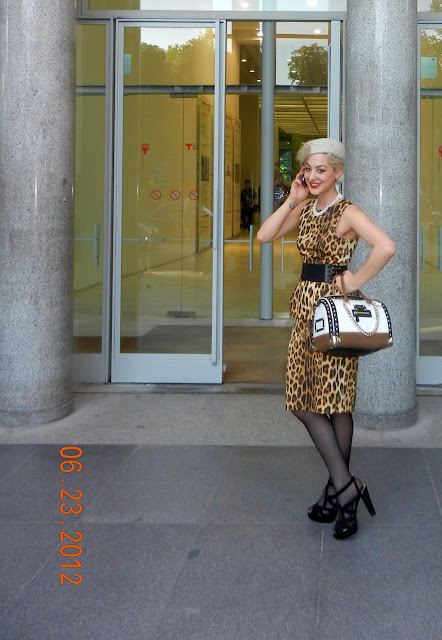 I'm pictured above standing in front of the Triennale museum, where a short film I had made for Diane Pernet was being shown so I made basically all of my best friends come with me and tell me how awesome I am the whole time. Here's the film being shown on the Big Screen:


And here's the ~actual~ film:

Later that night we went to Punks Wear Prada where I fell down the stairs and found a few Hot Punks who don't wear Prada and probably didn't get cast to walk in the show but will hopefully find some good work in showrooms in a few weeks or whatever. 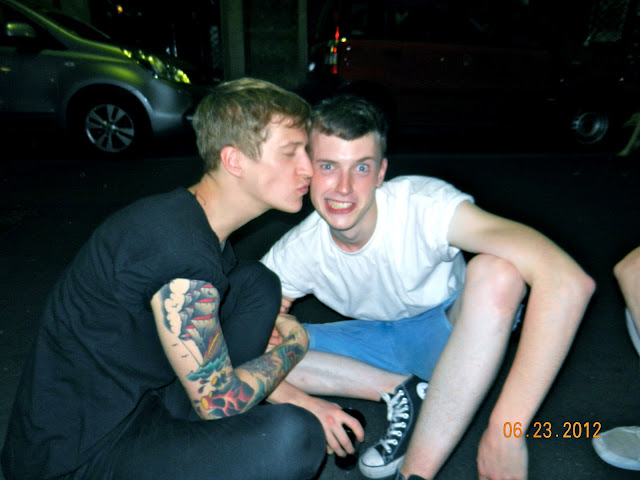 Filip fit in well with the Boys 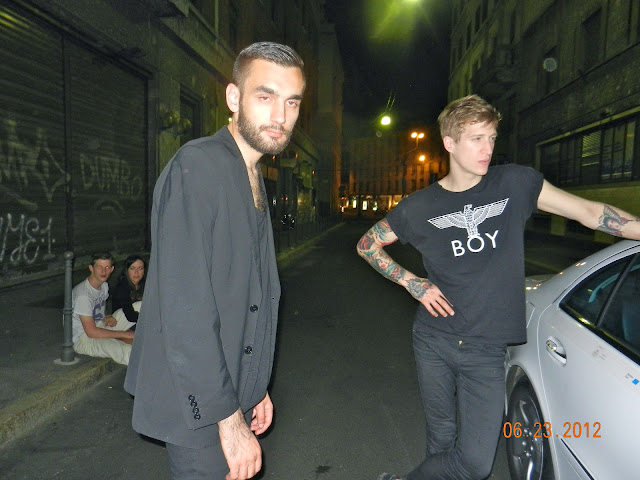 And taught everyone how to breakdance. 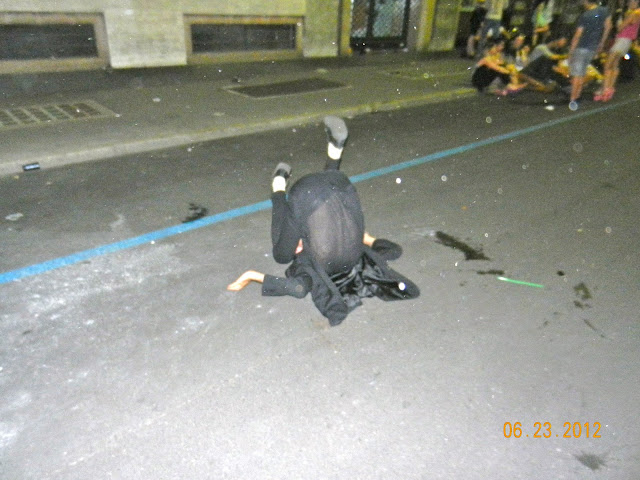 The rest of that night was a blur of romance, sex, sandwiches and lots of cheesy regrets. 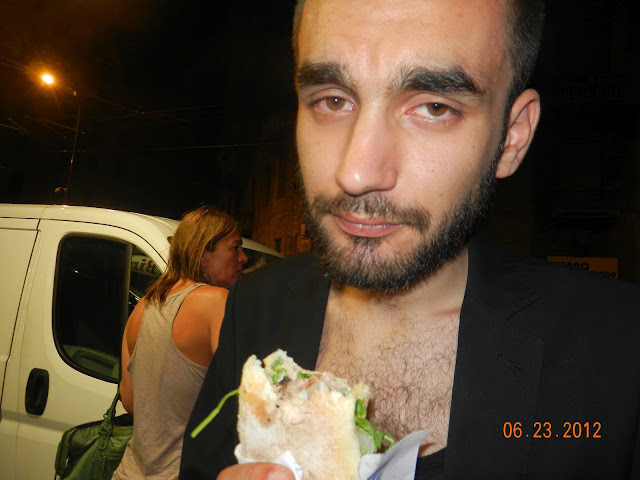 Saturday I went to the Dolce And Gabbana show dressed as a Boxer on her way to her Grandmother's house after a fight-I say that because under this transparent pink dress I'm wearing head-to-toe Gym Clothes from Nike, which unfortunately can't be seen via my camera's Aggressive Flash, which is super annoying but at least washes my ~horrible~ eye wrinkles out ;) 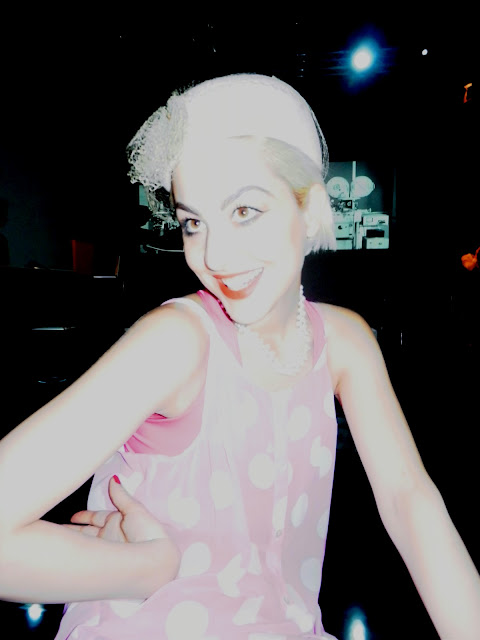 Here's some footage from the ~totally brilliant~ show. I honestly never cease to be impressed by Dolce and Gabbana's ability to take the most trashy, lolz, hopeless things and turn them into ~art~ that makes you want to run away to the south and get a tan and eat pasta and get pregnant by Mafia Lords. Good job, guys.

Sunday afternoon Filip and I met at the supermarket between our apartments and drank coffee and champagne on the street in preparation for another Big Night. (It should be noted that here Filip is wearing his Home-Made Miss Universe Dress, which I'm assuming was inspired by Big Bang Theory and dedicated to Sheldon Cooper): 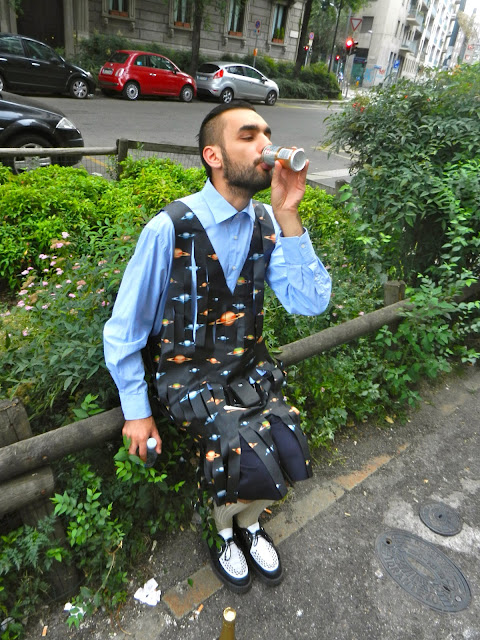 Filip and I had time to kill so before going to our party we took a bus to our favorite bar. (It should be noted here that I look like a Drag Queen and not a very successful one, at that): 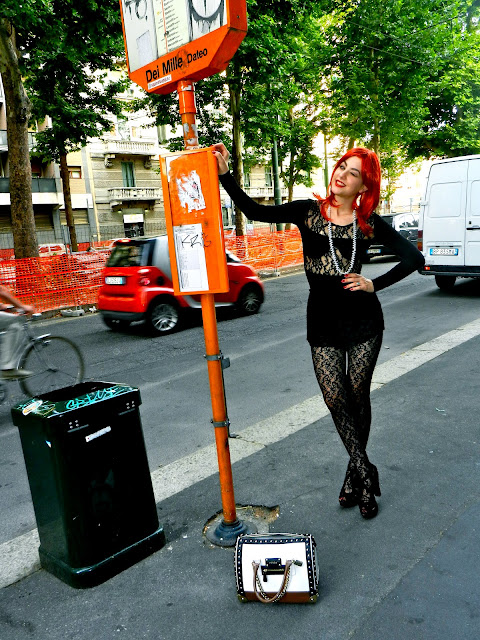 Filip and I spent some time at our Chinese Bar which used to be famouz via it being Where Everyone From Plastic Would Come To Hang Out but now that Plastic has moved and basically doesn't even exist now nobody comes to the Chinese Bar anymore and the guys that work there were so happy to see us that they even gave us free drinks. 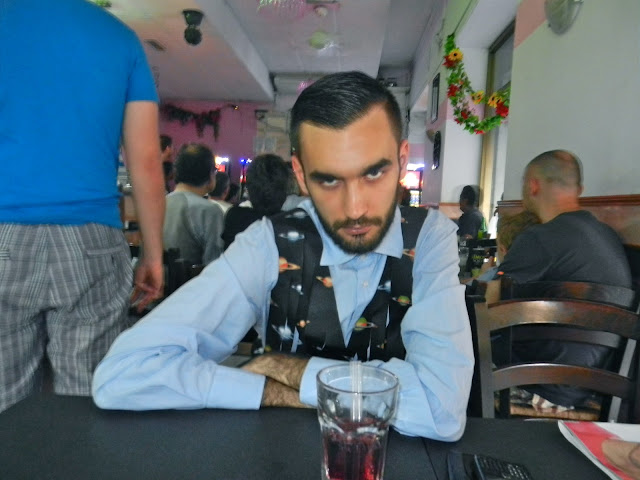 During our time there, Filip made me feel lots of ~things~ 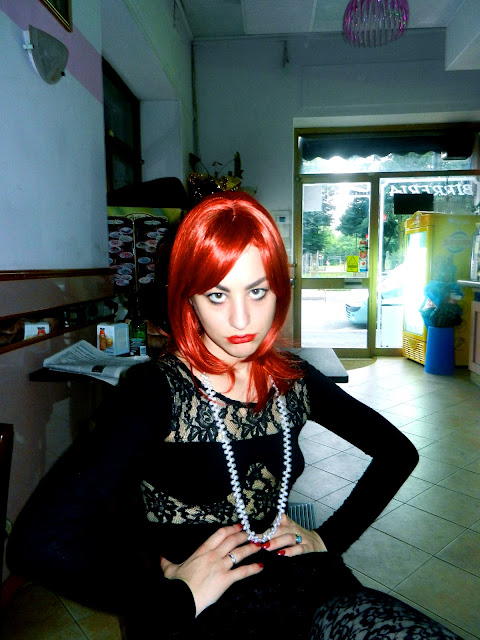 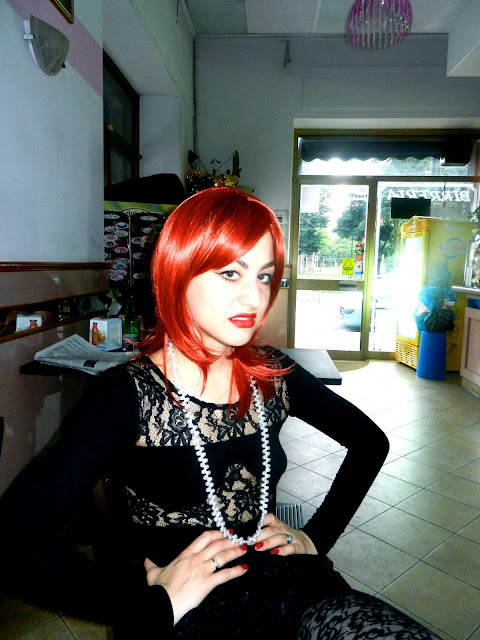 Filip is good at telling stories and dropping Drama Bombs and Making You Feel Emotional so if you're with him let your heart and your face muscles beware. 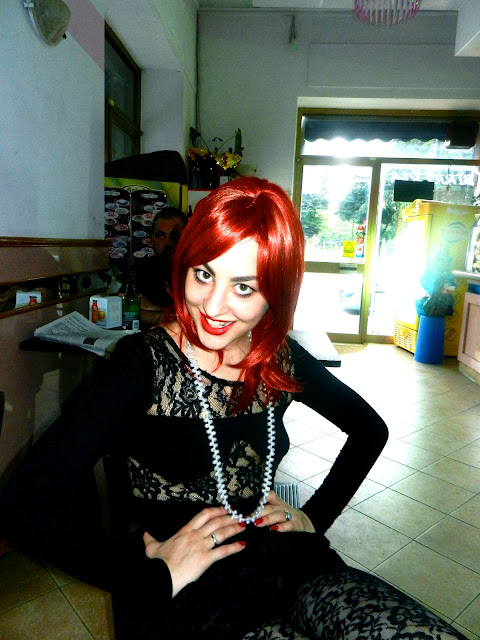 Here's when things got LOLZ: at last night's Dolce and Gabbana party they were PLAYING THE F'ING SOCCER GAME. On the big screen. To a bunch of fashion people. And when I complained about it to basically everyone from Anna Dello Russo to Anna Wintour to my Mom on the phone they were like, "it's culture, it's football, it can't be ignored," and I was all, "if it's culture and football it should ONLY EVER be ignored!" *Cries, smashes Belvedere bottle on Stefano Gabbana's shoe* 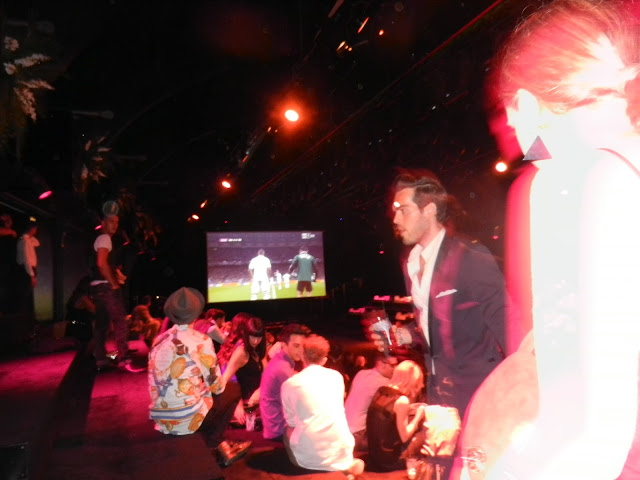 So while the game went on Filip and I listened to "Baby's on Fire" on my ipod and pretended we weren't there. We also decided the song would be much better if it were about an actual baby on fire. 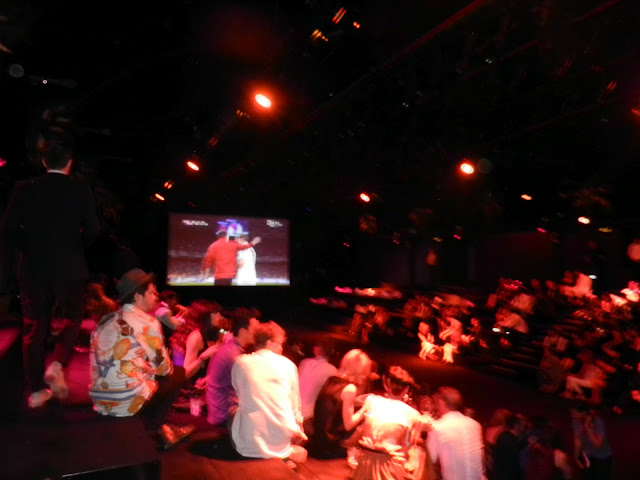 Thankfully someone finally hit the ball into something and everyone screamed and basically pooped their pants and FINALLY the band/singers/music started and everything was sparkly and amazing and beautiful and we all got so sweaty and gross and happy and we all danced until we cried. 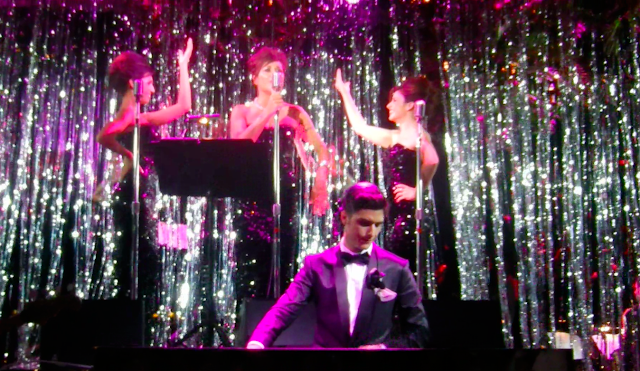 The party ended around two and I guess we had nowhere to go and no way to get there so as usual I just found the ~Hottest Dudes There~ and made them take us home with them so I could hit on them and drink their vodka and talk to their bugs or whatevz. 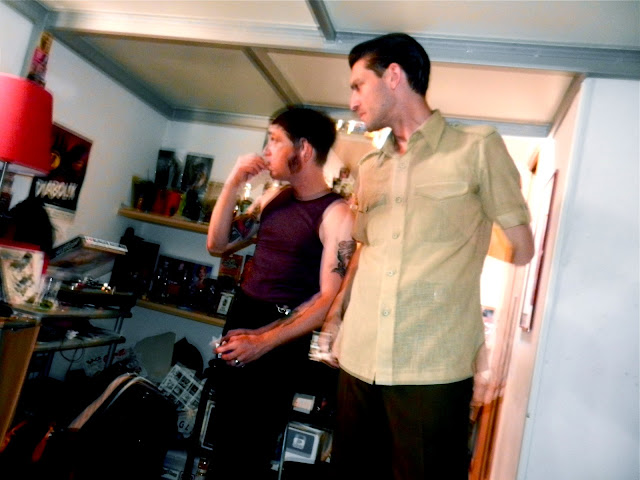 Filip just slept on the couch the whole time but I even got both their phone numbers ;) 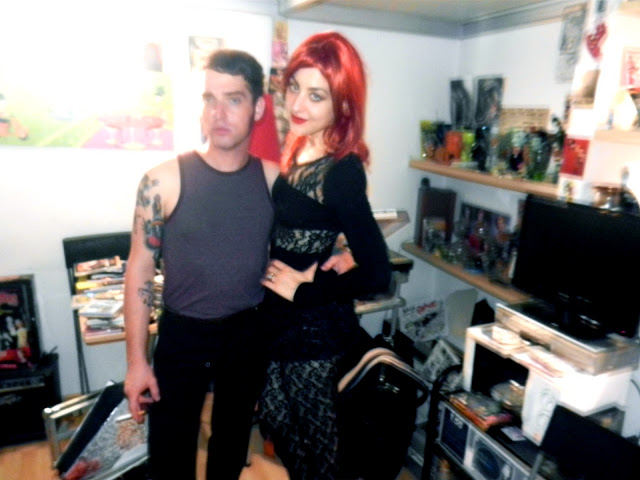 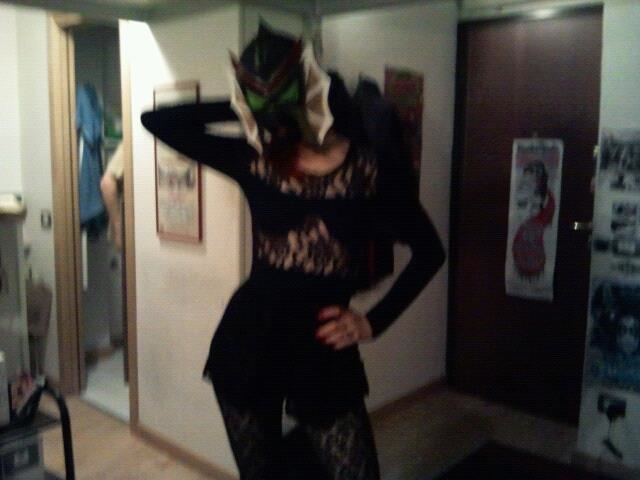 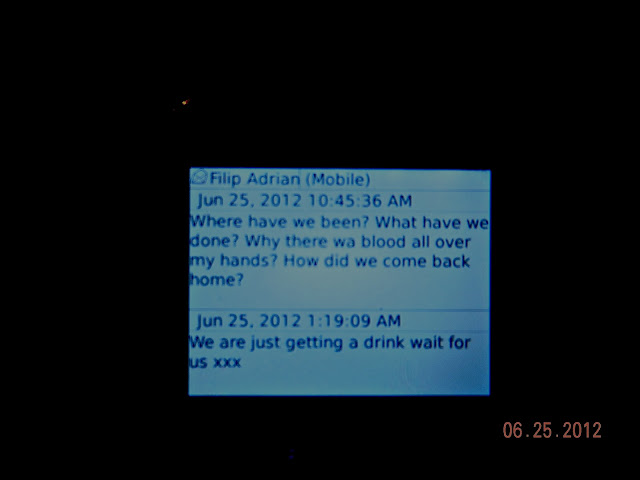