IT'S GETTING HOT IN HERE SO HIGHLIGHT ALL YOUR WOES

Today's the Hottest Day of The Year in Milan and I don't have air-conditioning (this isn't AMERICA OK) and I can't go out to anywhere that does have air-conditioning because tonight is the Last Game of the World Cup and Italy is in The Finals and whether they Win or Lose I'll probably get slaughtered on the streets so that means I have to stay in but it's too hot in my room to even move or breathe even though I have a fan because all the fan is really doing is blowing mosquitos into my face and messing up all of my wigs. 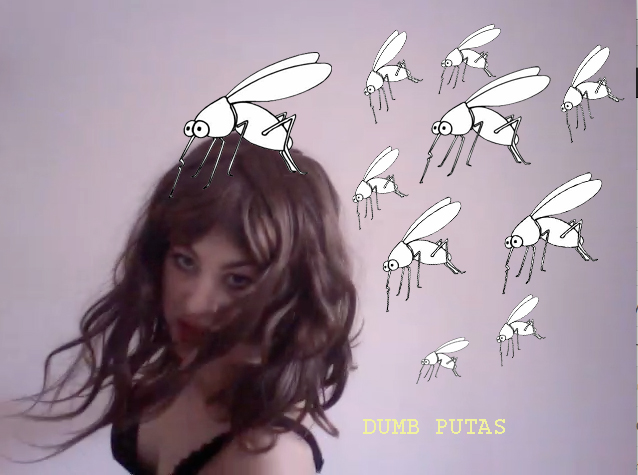 List Of Things To Do In ~Alphabetical Order~ When It's Too Dangerous To Go Outside Or Too Hot To Get Out Of Your Chair:


Bid on shit on ebay, not because you have a job/money (LOL) but just to jack up the price on things so you can laugh at the pathetic losers who will now spend 500 Euros on a pair of British Flag Converse or 5,000 on a Crappy Coach purse.


Call your Ex-Boyfriend and tell him you want him back and when he responds, "I want you back too you're the best thing that ever happened to me I don't know what I was thinking when I left you for my girlfriend," invite him over to your place and tell him to bring condoms and Chinese Food.


Dump your Ex-Boyfriend after y'all have makeup sex and tell him to "Get The Hell Out" when he says he loves you but don't let him take the Chinese Food with him, you want to throw it away yourself, how dare he think you're eating carbs.


Eat the Chinese Food Face-Down via a Pie-Eating-Contest.


Finish all of it and cry.


Grab the fat rolls on your stomach. 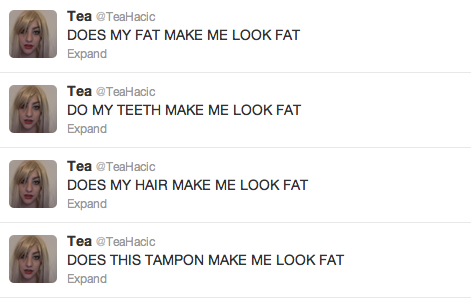 Inspire yourself to lose weight via watching ~only~ the first and last "Simple Life" episodes.


Jeopardize your Love Life via creating a Secret Sex Blog and posting your dirtiest secrets on it and accidentally "leaking" the link to the guy you're dating and "actually really like" or whatevz.


Keep still for as long as possible until the mosquitos in your room bite away half of your body weight.


Make yourself watch a "Classic Movie" for tomorrow's History of Cinema exam even though it's unbearable. 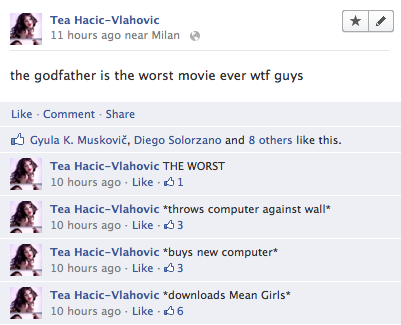 
Order Pizza and wait for the Pizza Delivery Guy wearing only a bathrobe and heels and ask him, when he comes, to bring the pizza to you (remember you can't get out of your chair) and ask him if he wants to see what's under your robe and when he says "no," throw the pizza in his face and cry hysterically.


Save Yourself via "Jesus."

Text your Ex-Boyfriend and tell him you're sorry.


Use him to bring you more Chinese Food.


Vent to your Mom about how fat/single/sad you are until she hangs up on you.


X is stupid I refuse to find a way to put it into a verb.


Yell at the Football Fans from your balcony because How Dare They enjoy this and How Dare They pretend they like "sports" for any reason other than it being the only way they can mask their Gross Nationalism and mask the fact that all they really wish they could be doing is fighting other countries in actual wars even though they're probably too soft to even "battle" and most of the people on their stupid team aren't even Italians anyway.


Zone Out or "Pass Out" or just die basically because what else is there to do.
Posted by Tea at 4:57 PM

Email ThisBlogThis!Share to TwitterShare to FacebookShare to Pinterest
Labels: hottest day of the year, world cup can s my d