I've always thought "blogging" via copy/pasting other work you do is a cop-out in the same way that interchanging Tweets and Facebook updates is, however these days I'm so busy waxing my chin and instagraming pictures of my toilet and I don't really have time to post crap on Every Single Individual Internet Outlet as much as I used to. I'll definitely get back into all that soon, considering that I've just decided to quit my master's program (and ask instead to be a professor within the master's program but that's another story and therefore another blog post) but till then I'm just gonna have to take the lazy fucker way out. So here's this week's Tea's Tacos which is #surprisingly about politics and I say "surprisingly" not only because Tea's Tacos should be a Sex Column but because I've failed every History class I've ever taken and forget which country I live in most of the time. But I'm actually trying to get away from "Sex Writing" as I literally don't have sex anymore so I guess this is a good start? Anyway, here it is: 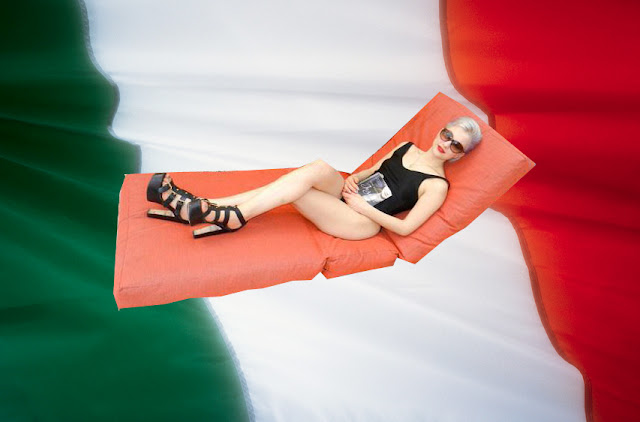 This week some guy interviewed me for his Webzine. He asked me pretty predictable questions, like which sex positions I prefer (none), what kinds of men get me into bed (all) and what I fantasize about (getting famous for growing the world’s longest chin hair). We discussed My Career and he suggested that my next move should be politics. He said this so I would reply, “I’m not qualified,” so he could answer, “here any woman is qualified as long as she can give blow jobs,” so I could laugh and say, “you’re right!” and touch his leg or whatever. Instead I explained that I could never go into politics here because I care too much.

When I say I care about politics I don’t mean I read newspapers or watch the news regularly (or ever) or even know what’s going on most of the time. Like, WWIII could come around and I’d probably go out and be like, “why is my bar closed?” When I say I care about politics I mean I care about Women’s Issues And How Politics Affect Them, as I’m sure y’all have realized by now (cue you rolling your eyes so hard your head hurts). Anyway, politics are terrible everywhere but Italian Politics make me want to crawl inside of Beyonce’s vagina and take a nap forever.

And speaking of which, the election is here! And you know it, because the boy you asked out tonight was like, “sorry I’m going to Rome because I have to vote” and then you got drunk by yourself and fell asleep in your bathtub. Sure, that’s annoying, but elections aren’t. Elections are fun! They’re funny, because they encourage dumb people to write “smart” Facebook Statuses, inspire hilarious memes and start silly Twitter Trends. For example, a big theme #trending this election is #AGENDADONNE, which is comical considering that out of what seems like thousands (millions!) of Italian Prime Minister candidates only a tiny percentage of them are women. Lolz, right?

Anyway, as someone who isn’t Italian, who isn’t voting, and who, let’s face it, only cares about ladies, I’m sure y’all want my advice on who to pick, so I’ve made a guide:

PICK YOUR PRIME MINISTER BASED ON WHO HE WOULD BE IF HE WERE A FEMALE CELEBRITY: 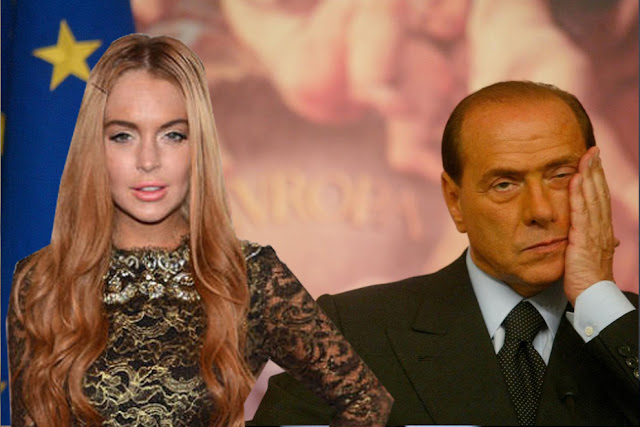 BERLUSCONI=LINDSAY LOHAN
The two have more in common than their orange glowing complexion! Like Lindsay, Berlusconi fell from grace, had legal trouble, and probably also a meth problem. Like Lindsay, he planned a huge comeback, accompanied by an enormous hype. Lindsay plays Elizabeth Taylor? Berlusconi is back on TV. Lindsay does a sex scene with a porn star? Berlusconi re-runs for office! But like most things that need to be hyped, neither comeback is working-nor is the Botox. I know you have a soft spot for Mean Girls but leave these two where they belong, which is in the past and maybe an “ironic” iTunes playlist. 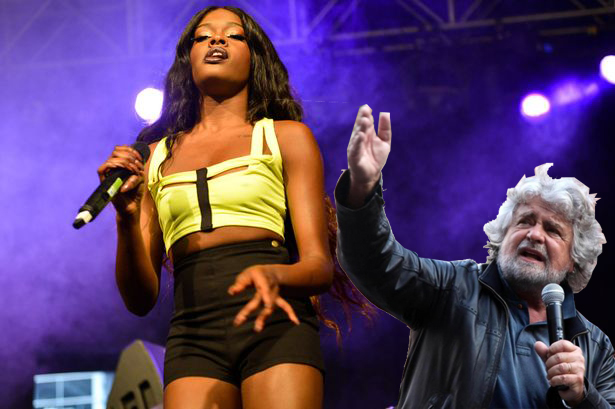 We all know that “independent” really means “insensitive asshole.” Like Azealia, Grillo is loud, rude, and demands all respect without expecting consequences for his actions. Azealia called Perez Hilton a “faggot” and Grillo called a 94 year old Nobel Peace Prize winner an “old whore.” Both were was surprised by the backlash,  probably because Azealia was used to being unconditionally-adored on Tumblr and Grillo was accustomed to getting off easy for manslaughter charges (oops). He’s an “ecologist” who owns a yacht and Ferarri and Azealia is a “feminist” who Tweets misogynistic ideals on the daily basis. Whatever, you ain’t their daddy, they do what they want! 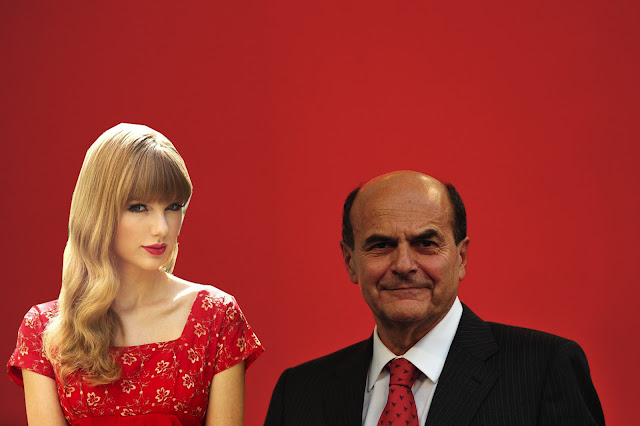 BERSANI=TAYLOR SWIFT
Bersani is everything that’s acceptable about the left wing, aka totally lame. Approachable and popular, much like Miss Swift, he probably keeps a bedside diary to record his dreams and compose poems about heartbreak. Yes, he seems tame, but that being said, did you know that there are pictures of him smoking cigars on the internet? All over Google images! Only badasses and criminals smoke cigars and Bersani isn’t a criminal according to Wikipedia, so let’s just assume that he’s actually an undercover rebel. Just like sweet Taylor Swift is secretly a wanton sex-goddess slut! Who would have guessed? 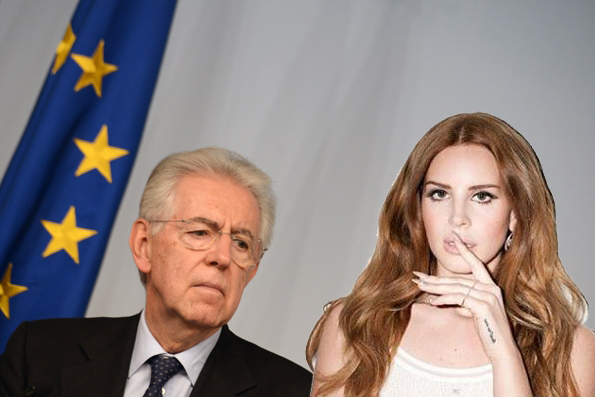 MONTI=LANA DEL REY
Just two old-fashioned, old-money honeys trying to be hip and subversive. Lana tries to be cool by singing songs about running away, stealing shit and fucking her daddy, and though I’m not sure what Monti’s tactics are, I’m certain he would look great sipping a cold cherry coke in a white bikini on a shady spot by his sparkling swimming pool. 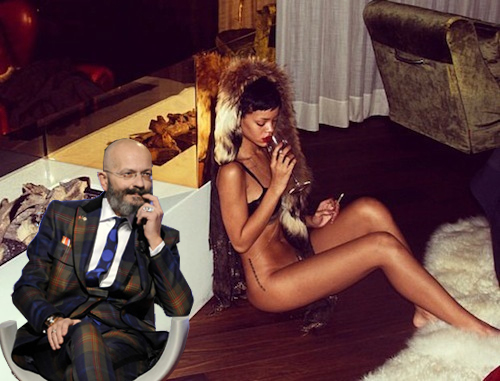 GIANNINO-RIHANNA
Giannino and Rihanna are totally “out there” and so unpredictable! They look crazy because they are crazy, or at least are being managed by people with an interesting sense of humor. Rihanna gets beat up by her boyfriend and Giannino gets verbally beat-on by Berlusconi. Him and RiRi are a perfect match, which is more than what I can say about his outfits.

I know I’ve left out a few (billion) candidates but in Italy it’s literally impossible to keep track of them all. I hope my guide has helped you, and remember, regardless of your political views, it’s imperative that you vote! Unless you’re stupid-in that case just stay home and make comments on VICE articles.
Posted by Tea at 6:17 PM

Email ThisBlogThis!Share to TwitterShare to FacebookShare to Pinterest
Labels: berlusconi, election, I went to fashion school and all I got were crappy photoshop skills, lindsay lohan, tea's tacos, vice, vice italy