THE FREAKY PRINCESS (AND ME) 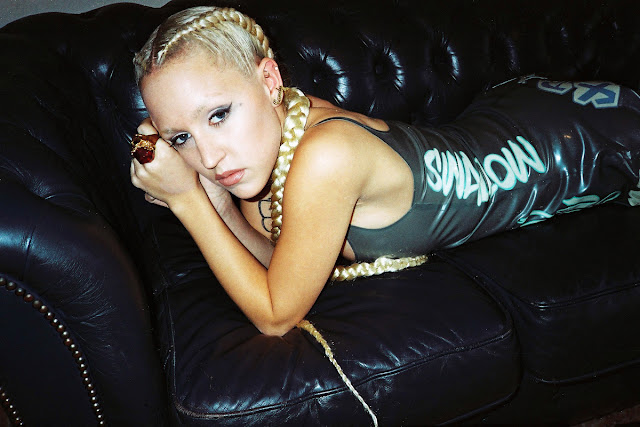 Everyone says when you meet celebrities they’re smaller than you expected, so I wasn’t stunned to find the Amazonian Brooke Candy is actually barely above five feet and (dare I say?) junky-thin. What surprised me was her personality. Like y’all, I know Brooke from her Tumblr and bizarre music videos which make her seem about as approachable as the reptiles she makes out with in them. I was nervous to meet her! And not only because I’m a fan and therefore afraid she’d think I’m lame and/or catch me putting her half-eaten food in my purse! No, I was afraid she’d be too much, too loud, too obnoxious-even for me. So I was shocked to find "The Freaky Princess" eloquent, elegant and full of old-school etiquette. Brooke isn’t just the Sex-Crazed Fashion Alien she seems like. If anything, she’s a Well-Mannered Cat. I learned this (and so much more!) speaking with Brooke her first morning in Milan, where she’s come to perform at PWP, eat [vegetarian] pasta dishes and make us all feel dumb and boring.

Welcome to Milan! What have you done so far? Aside from streaking on your balcony?

You’ve been following my Tweets!

We just got here last night. We stayed in a beautiful hotel and ordered room service. I ate spaghetti, and I really like spaghetti, so that’s exciting. That’s huge.

You came to the right place for that. How are you preparing for your performance? Do you have a backstage Diva list?

I just ask for tea. If I have a back room, I take two minutes to drink tea. Otherwise just the adrenaline of performing is enough.

Does being a stripper help you perform?

I don’t do that anymore, and that was just a way to make money.

It didn’t inspire you?

I started stripping because I needed a job that would give me enough free time to work on my music while living the way I wanted to live. Before I started stripping I was making music but I wasn’t comfortable with my body. I was very butch and I wore caps and sweatpants. And then I started to strip and got so comfortable naked that it became a part of my persona-not that I’m a “made” persona-Brooke Candy is my real name and my lyrics are based on my life. But stripping inspired my live performances and made me more open with my body. I wouldn’t recommend it for every girl but for me it was an eye-opening experience. It helped me learn how to work people. How to work a man.

A lot of psychology goes into stripping.

I had a method. You learn that guys who come in with friends don’t have or don’t spend money. But the ones who come alone do. So I’d find the lonely guy and sit next to him and say, “it’s my first day, I’m so nervous, I’ve never done this before, will you talk to me?” So we’d talk until he’d offer me a drink, and that drink would lead to a lap dance and that lap dance would lead to lots of money. 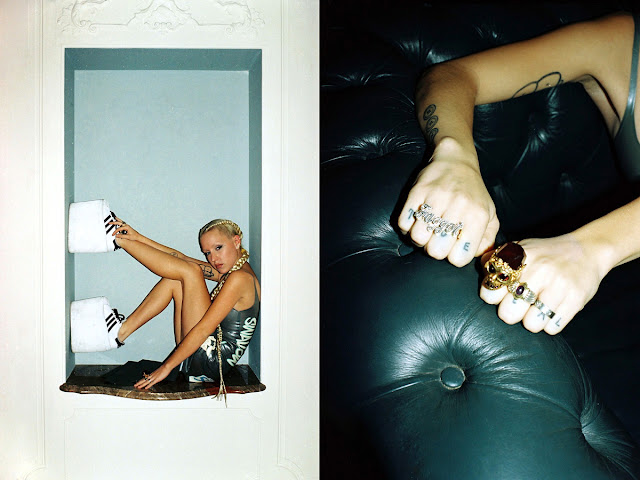 You’re obviously a feminist, yet you’re very sexual. Can you explain how it’s possible to be a feminist while behaving in ways others deem “objectifying” to women? I understand, as a sex-positive feminist, but I’m curious as to what you think.

It isn’t objectifying if I’m objectifying myself! Nobody is putting me in an outfit an putting me on stage and saying, “go!” I chose to use my body. Every human has the exact same shit-breasts, dicks, whatever. We all know what we look like, so I don’t even really believe it should be an issue. Like I said, I don’t preach that girls should do it, but if you choose it, that’s fine.

How do you feel about Taylor Swift and Katy Perry publically denouncing feminism? Even though they’re obviously, by the definition of the word, feminists? Why are so many women afraid to associate themselves with that word?

Katy Perry won the Woman Of The Year Award and said, in her speech, "I'm not a feminist, but I believe in the power of women." And Taylor Swift totally avoided the subject when asked in an interview.

I need to think about this for a second...

It didn’t make sense to me, either.

Hearing Katy do that doesn’t surprise me but Taylor Swift is insane! Taylor seems so intelligent! Maybe there’s someone behind her pushing her to say this? Maybe it’s her label’s fault? Sorry, Taylor blows my mind, that makes me not like her anymore. I always thought she was cool, but now I dislike her and I’m not a fan anymore…I can not fathom this!

I think the problem is they don’t know what the word actually means?

I think they’re afraid of their public. For example, tons of people adore you, but you get hardcore haters as well. And I think that’s unfortunately a result of you being such a sexually-open feminist. I think it pisses men off, and it confuses people. It’s unbelievable the shit people say to you...do you read all your comments? Do they affect you?

I read every single thing written to me. Like, I wake up in the morning and read every single Tweet directed towards me. I read every comment. 95% of what I get is love. The hatred doesn’t offend me because it’s ignorance. I used to re-tweet the hate to shed light on how evil people can be but then I realized I shouldn’t publicize it because they just want attention. But it doesn’t affect me. I’m strong and I’m centered and I feel confident with who I am and with my beliefs so I don’t care who the fuck likes me and who doesn’t.

What does affect you?

I’m a sad person in general. I’m very manic. I’ve always battled with depression and thoughts of suicide. It’s just a chemical imbalance, I guess. There are certain things that set it off, though. Like, I performed in Madrid and they treated me with disrespect. They were on drugs and the crowd was rowdy. They were showing me love but the love they were showing me was so dark that overnight I lost faith in humanity. I was like, I don’t even want to perform anymore! I was basically sexually assaulted and raped on stage. I was like, I came here to bring you love and happiness and you’re bringing me violence! I know that I promote sexuality but that doesn’t mean you can molest me.

I believe the artist should be in control when they are on stage. To have the stage but not have control over it, to have shit ripped off of me and stuck inside of me was horrifying. I finished my set and cried for the rest of my trip in Spain. But then we went to London and I was like, OK, I’m doing the right thing (laughs). Not to say that people in Spain are bad, but that was wrong. That specific occurrence was really unfortunate. I want them to know it was wrong and that I feel violated. From now on I’m taking cues from GG Allin. If you’re going to rape me I’ll fucking throw my shit on you. I’ll poop on stage and throw it in your face. But I want my performances to be full of love, so I hope it doesn’t come to that.

I love Courtney Love. She’s really similar to me, as a performer. She’s such a fucking feminist and very sexual and crazy and brilliant. But people interpret that in a weird way and think they can take advantage of us.

Because people are idiots. Especially men.

I honestly think that women are better than men. I don’t care, I’ll fucking say it. We carry life, we create it, we’re nurturing, yet we have to deal with more bullshit, everything is more difficult to us, everyone fucking hurts us, yet we’re strong, we aren’t destructive, we aren’t aggressive, despite being the victims of aggression every single day. Like give me a break. 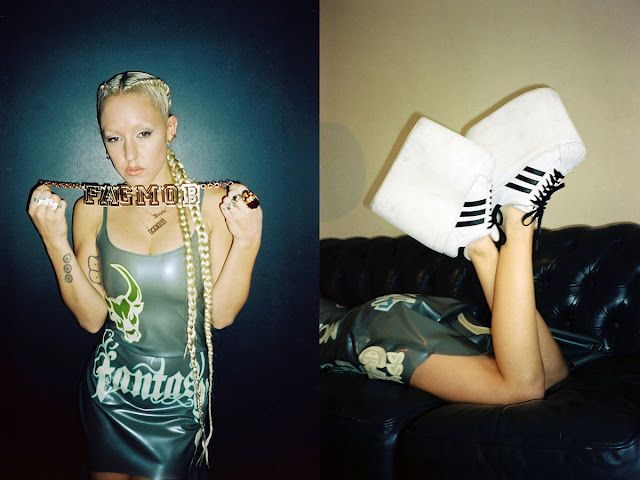 Would you say your main goal is to empower women through your art? For example, “next time they call you a slut, Brooke Candy tells you not to give a fuck,” is really powerful shit for a young girl to hear.

Totally-I’ve gotten a lot of positive feedbacks since then. Girls saying, “since you put out that song, I no longer give a fuck.” Girls message me regularly saying, “I don’t care anymore, words no longer hurt me.” I think that what I promote, even if it only helps one person, is huge to me. Because I was tormented my whole life.

Who did this for you? Who helped you not give a fuck?

Lil Kim. She was a successful woman, she preached everything I believe in. She was a total feminist in her lyrics and in her sexualized imagery. What she stands for is so cool. A lot of female MCs will say they were inspired by her, but what are they taking from her? So many female MCs just rap about nothing.

Or they rap about fighting each other.

I hate that. All that just for attention and record sales. I don’t believe in that, I believe in building your fellow women up! Because you’ve gone through the same shit, it’s been hard! Knowing that another woman has dealt with that and then trying to knock her down is so stupid to me! No woman should be mean to another woman. Especially through music, because music can sway the masses, literally. You can get into people’s minds and sway their opinions and change their lives. So why are you rapping about being a rich bitch? Nobody can relate to that!

Why do you think there’s so many new female MCs popping up now? For a while there was nothing, and now, all of a sudden!

Want to know? Kreayshawn. She’s a feminist, she’s cool, she doesn’t rap about bullshit, she tries to be really relatable, she’s a friend of mine and she’s really sweet. She opened the door for all of us, and none of these women thank her. They all try to take her down, and that’s so sad. She was able to do something other female MCs dream of doing and she gets no respect. She opened this door and labels saw through her a profitable market, so now these other girls have been able to get into it. I believe she truly opened that door. So pay her some fucking respect.

People are stupid, that’s the problem. I’m trying to spread a message but people don’t get it. Aside from the gay community. They’re my biggest supporters. Gay men and lesbians. That’s the final frontier of prejudice.

Why do you think they support you so much?

They accept someone who’s different, because they’re different. They want to rep me and build me up because they like the fact that I’m standing up for them and that I’m one of them. I’m not just claiming this group of people for attention, I identify with it. I was thrown out of my house when I told my mom I liked girls. I was fifteen. I can’t do anything else but represent them. If I don’t, I’ll feel empty inside.