GUESS WHO'S COMING TO DINNER (FOREVER)

(I wrote about living with my BF for VICE Italy) 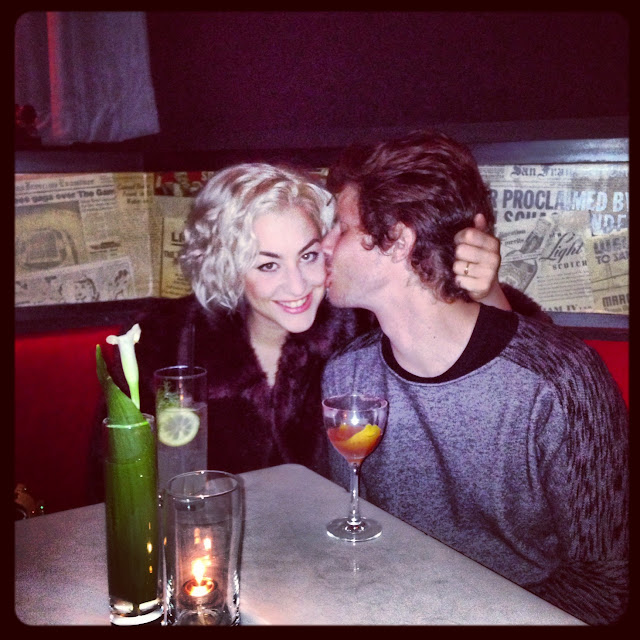 “You have an IRL life now.”

My friend comforts me as I agonize over my dwindling online presence (I haven’t updated my blog in weeks and haven’t re-tweeted Amanda Bynes in days). She assures me it’s good that I’m not “all over the web” anymore because that makes me seem “mysterious.”

I hate mystery. Secrets are for prudes and pedophiles. There’s no point to doing anything unless you tell everyone about it. Over-sharing would be my middle name if I didn’t already have a hyphenated last name aka the one thing preventing me from getting famous since I eliminated the only alternative (being brunette). But things have changed for me recently and I’m finding myself seeing the good side of mystery.

My boyfriend and I met three months ago. We said “I love you” the first week and by the second decided I should leave Milan to live with him in San Francisco, where I am now. Yes, we’re moving fast but only because we’re romantic and spontaneous, or as my therapist would say, “dumb.” (And by “therapist” I mean cat, because I can’t afford a therapist, and by “cat” I mean that guy who sells crack on my street, because cats can’t go out in this city and I refuse to keep prisoners).

Living with a boyfriend makes life nicer-if he’s nice. Mine gets me coffee when I’m too busy painting my nails working to do it myself and has no problem carrying a broken organ I found on the street in the middle of the night up three flights of stairs and into our bedroom (I’m a Strong Independent Woman and I can let him do everything for me if I want). If you’re nice, living with him will subject you to annoyances, like having to run outside to fart or staying up all night Google-searching makeup that’s safe to sleep in (it exist, and I’ll get to that later). But nice or not and no matter how charming he is when he burps in your face and regardless of how stunning y’all look hugging through Instagram filters, living together peacefully takes patience and wisdom and I don’t have either of those, but I do have this list:

HOW TO LIVE WITH YOUR BOYFRIEND WITHOUT RUINING LIFE, THE UNIVERSE AND EVERYTHING

1) Space
Quentin Crisp wrote in How to Have a Lifestyle that nothing crashes your style quite like having a roommate, especially if that roommate is your partner. I always hoped I’d end up living alone because I thought I’d always be alone. Everyone else did, too! Recently a girl wrote me, “you having a boyfriend is one of the horsemen of the apocalypse.” (It’s true, and the end is near). Needless to say, I had my doubts about co-habitation. Sharing rooms in college was terrible and having flat-mates was far from fabulous. But now I know that’s only because I didn’t love the people I was living with, and therefore couldn’t love their stuff! Sure, I died a little when I pushed my dresses against his vests. But when organizing shared space, creativity goes a long way, and by “creativity” I mean hiding his things under the bed when he’s sleeping. 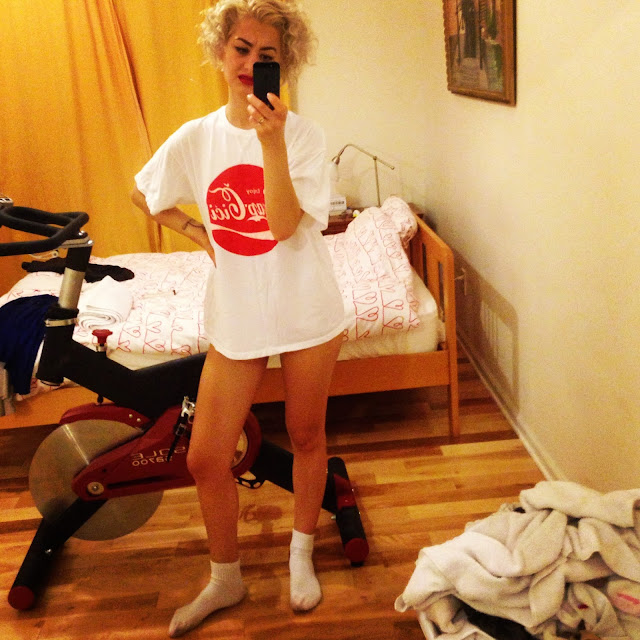 2) Grooming
Today my boyfriend sent a picture of me to his mother, with the caption, “finally, without makeup.” I was wearing concealer, powder, blush and mascara. Men don’t know what we go through to look good and they don’t want to know what we go through to look “acceptable.” Men want women to be creatures of mystery. You must always keep them guessing how your eyebrows stay in a Nike swoosh, how your mustache disappeared and where your dick went. Obviously, they should never see you without makeup on. If you aren’t willing to go to the bathroom and put on your face and come back to bed before your boyfriend wakes up, (this isn’t hard, boyfriends sleep all day), I suggest you try this over-night makeup, or learn how to sleep in the tub.

3) Romance
There’s a fine line between kinky and lazy. There’s a big difference between “I want to watch you pee” and “I left the bathroom door open.” Becoming too comfortable with your boyfriend can lead to boredom, which can lead to cheating, which can lead to, “he just walked into the knife!” Living in Italy taught me that all men cheat, so to keep yours satisfied you must pretend to be a different person each day. I know I’m doing it right when he says things like, “you’re so lovable when you aren’t crazy.”

4) Fights
People say the best part about fighting is the makeup sex, and I’m like, are you kidding? The best part about fighting is crying in the shower so loud that he tries to kick down the door and you call the police but the water breaks your iPhone so you demand that he buys you a new one. Ok, that hasn’t happened yet. So far my boyfriend and I have only bickered about little things like sexist jokes (never funny) or fake pregnancies (always funny). But I know we’ll have huge fights eventually and then I can yell things like, “I left Italy for you!” *throws dish*  to which he’ll respond, “that’s the best thing I’ve ever done for you!” *punches wall* to which I’ll respond, “the best thing you can do for me is leave before I jump out the window!” *faints* Speaking of suicide, last week I posted a selfie on Instagram with the caption, “my boyfriend isn’t paying attention to me so I’m going to drown myself.” It worked wonders. 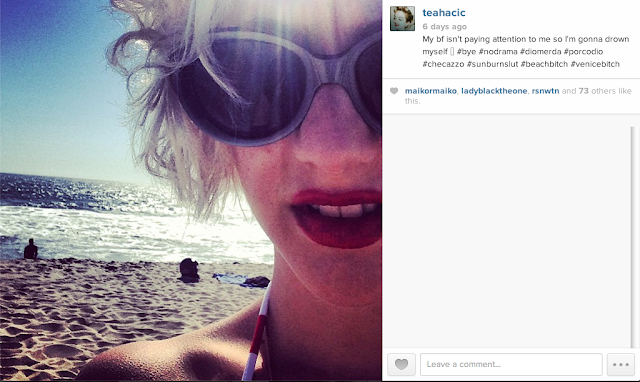 5) Chores
I’ve had all-male roommates for the past few years and aside from pee on the toilet seat and the meat-related messes (why are men always cooking meat?) it was surprisingly cool! I felt maternal towards the girls they’d bring over when I’d let them use my tampons and safe when I’d bring home strange men. Probably because of that time a dude tried to break in and the boys yelled at him and called the police while I locked myself in my room and wondered how much it would hurt to jump onto my neighbor’s balcony (I’m not saying women are too weak to fight, just smart enough to avoid it). Anyway, boys are messy but they’re also boys, meaning if you yell at them they’ll feel like their mother is yelling at them so they’ll do whatever you’re asking (and if it’s your boyfriend you’re yelling at he’ll do it fast, knowing he’ll get a bj). 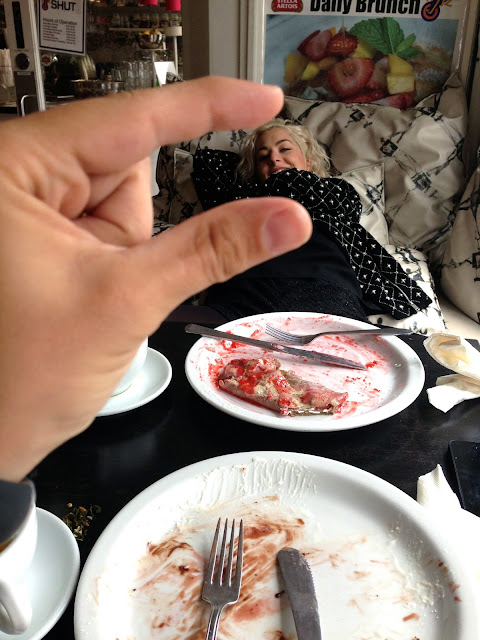 6) Friends
We all know that girl who moved in with her possessive boyfriend who made her hang out only with him or his friends all the time so she never went out and ignored all her friends’ calls because she was too embarrassed to let them see what she’d become (someone who wears an apron un-ironically) so by time the dude left her, she had no friends and nowhere to crash. Don’t let this be you! When you leave your friends for your boyfriend he should leave his friends for you too so eventually all y’all have is each other (and his hidden stuff under the bed). Co-dependency is more binding than a pre-nuptial.
7) Work
Don’t let your boyfriend distract you from what’s important, which is publishing your best-selling novel (Lady Gaga fan-fiction). Today my boyfriend wasn’t letting me concentrate on my writing (I could hear him breathing-how rude) so I sent him out for coffee and he brought me that and a paper bag. Inside the bag was a bottle with the label, “Skinny Girl Margarita.” I asked him what it was and said, “you love margaritas and hate calories so this can be a treat when you need a break from writing.” It was what my therapist would call a “breakthrough.”