I’ve aged five years in five days. See below! On the left, there’s a picture of me on the first night of Milan Fashion Week and on the right, the last. What happened in between? Where did the left girl’s spark go? Did she trade her eyebrow arches in for a knockoff Versace purse? I wish...it’s much worse! 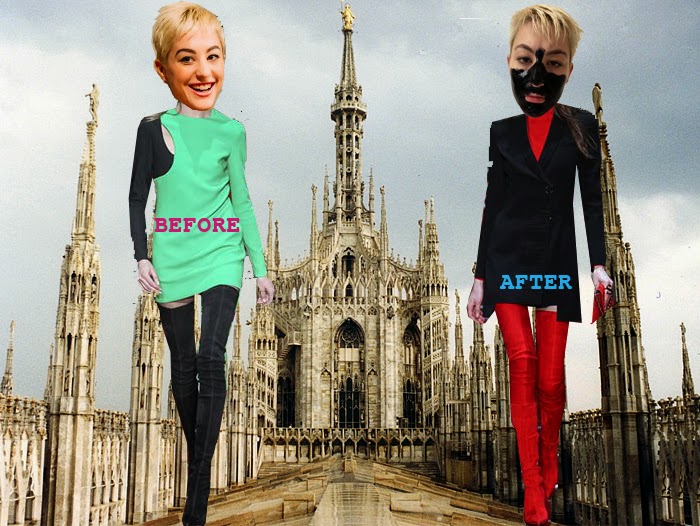 I like my men like I like my postal service: hard to get! Or in other words, Italian. No offense here; they take pride in their slow strides, driving women mad. It’s charming at a bar but unbearable when waiting on fashion week invitations.  Missing almost all of the Milanese catwalks was devastating. It was Berlusconi’s mistake to make organization a lesser priority than escorts and mine to assume I’d be on any lists. “The paper inviti and guest list are diversi, signora.” “It’s signorina!!!”

As one who used to hold the clipboard at Milanese fashion events, I can attest they are only there to make others feel bad. Was being rejected now my punishment for the years I spent doodling dicks around fake names and shaking my head at strangers?

First, I was refused entry into Moschino, so I took my friend’s underwear invite and wore it over my pants for the night. I told everyone at Rocket Club that I watched the show from front row, but they didn’t hear me, since SimonMilner was DJing and an ego-maniac Hooligan aka my Husband was on lights. Together, they induced chic seizures. I walked home at three, hoping for better luck with Versace. 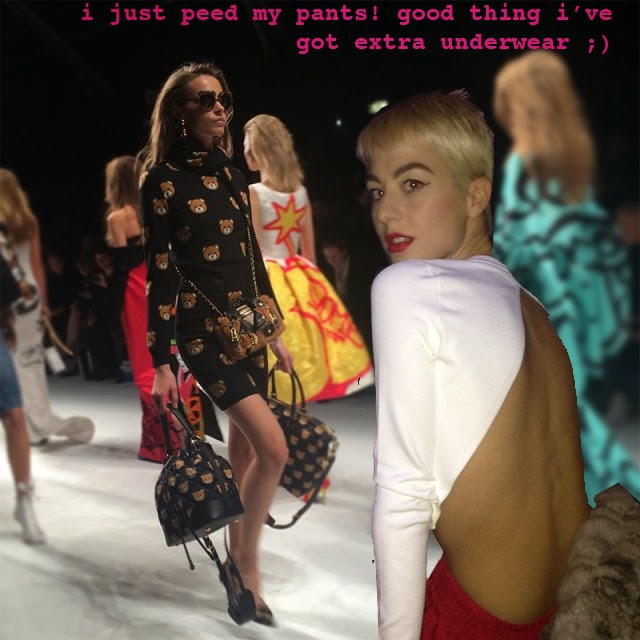 The next night I wore a suffocating Versus dress to the Versace show, hoping Donatella would see and invite me upstairs for coffee. What a waste of a broken rib! I was empty-handed again and wasn’t on the list, either. To point out how bad I felt, I’ll say the highlight of that hour curbside was watching Chiara Ferragni walk by. If you don’t know her, I won’t tell you who she is. That way, you can remain one the few who won’t have to scratch their heads, asking WHY? Speaking of questions, I was interviewed on Radio Popolare by Marta Stella that night! I’ve become popular in Milan ever since leaving Milan. I appreciate the attention now, but why did nobody care when I lived there? Where were all you supporters when I was sitting alone at bars every night, crying into flat wine? If you’re a fan of my work, why didn’t it go viral??? I feel like an artist who starved to death, watching their paintings become priceless from hell. 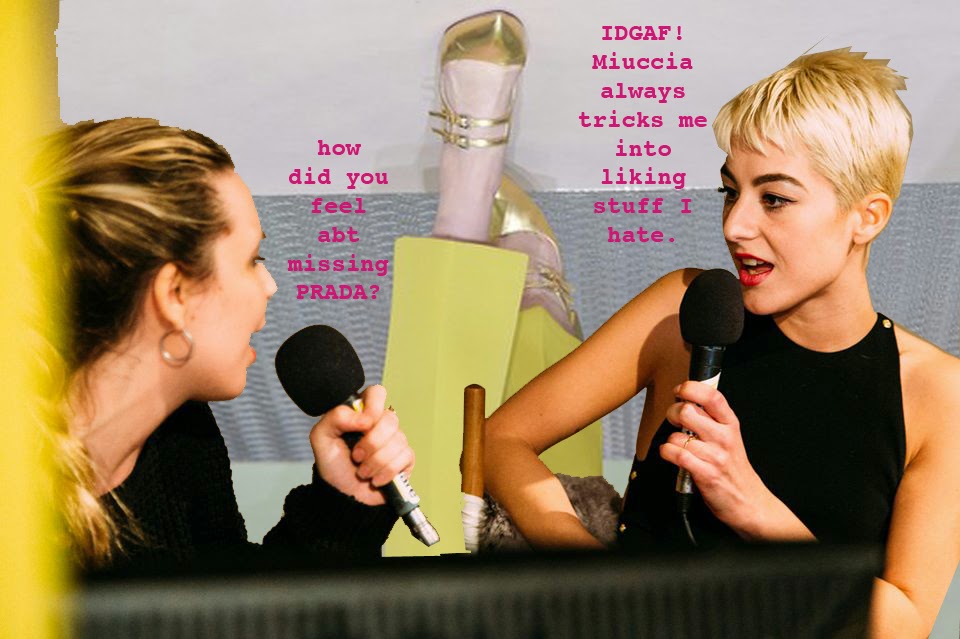 Did you see what happened at Prada? I didn’t! The only lining I saw were silver linings in my rainclouds. I figured, if I can’t get into the shows, I’ll make a diary about it! “So far, I’ve missed Moschino, Prada and Versace. Next, I’m missing Cavalli, Pucci, Gucci and many more! Stay tuned to get the inside look at being a fashion outsider.” I made a quick reject video in front of Cavalli. I can’t tell you about the runway, but the guests outside were all bare legs, studded stilettos, zebra print manis, tanned leather faces. I didn’t feel so bad about missing that one. Even a butterfly camped outside the show was like, “nah.” 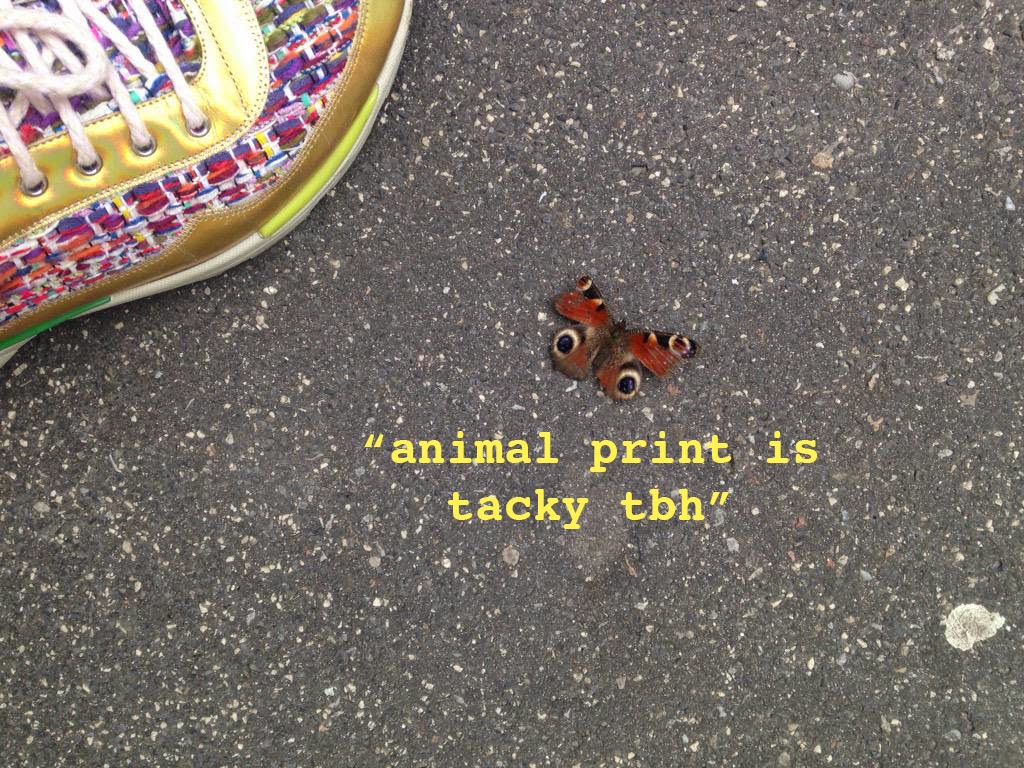 If you think about it, the group of people who go to shows and don’t make it inside are much more exclusive than those who do.  Reporting my rejections is a brilliant idea, I thought! Maybe I’ll push my career into Vine-famous territory! Will I get free makeup? Get paid to host parties in Vegas? Make my dead grandpa proud? Before I could find out, someone did their job (a foreigner?) and I got my Pucci and Marni invites. Ok, my genius plan was out of the question, but at least I could watch gorgeous models strut all over my dreams.

Contemporary fashion is missing fantasy. Street wear is cool but does it make you dream? If a dress doesn’t inspire you to picture yourself winning an Oscar or getting public revenge on an ex-boyfriend, is it even worth seeing? Emilio Pucci is the epitome of Xtreme Italian fashion, and that says a lot.  Pucci always adorned the sexiest, most outrageous celebrities. The brand is daring, loud and worthy of a daydream. 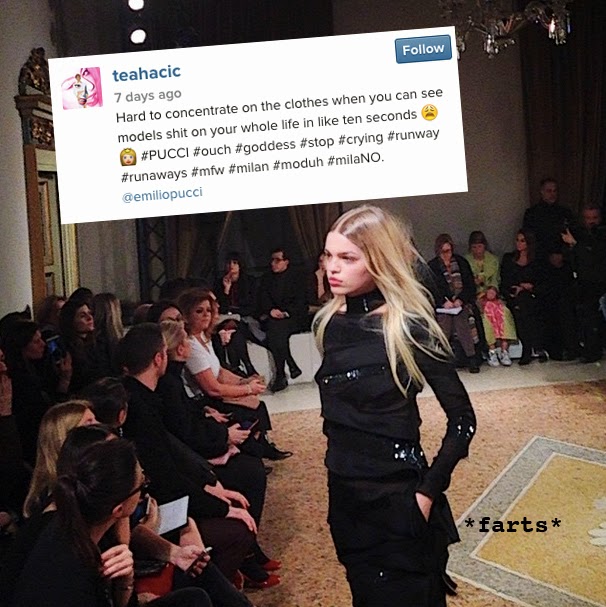 So, who will wear the A/W 2015 collection? Telling by the velvet, slits, sheer silk and stars, it’s perfect for vampire brides on their way to a honeymoon. Or, a political fortune teller? What about God’s mistress, or God herself? (Lindsay Lohan or Paz De La Huerta). A rock star could definitely be caught on a drug run in one of the suits. Full flared pants and sleeves, the seventies are calling for reformed hippies, too! I’m not saying anyone can wear this stuff; just anyone who wants to be someone so hard it becomes a thing they can’t escape even if they want to. If you don’t have a dream yet, don’t fret. Just figure out what suits your hips best and the rest will fall into place eventually. If the Italian post can pull through, so can you!

That’s a good Tweet, no? I went to a café for Wifi. There, I ran into an old buddy. Good old James Goldstein! We're good friends, yes. He said he didn't remember me, not even that time I interviewed him last fall, so I laughed and laughed at the joke! Good old James...he said he was just stopping in for a snack and I asked why he's waiting to order? You shouldn't pay, I said. You see, I'm sitting in someone's old spot, with their aperitivo plate still full of free food, nobody even noticed! Not even when I ate half! He didn't want to join me. Some people truly don't understand a good deal! Haha! Good old James. I miss him already. 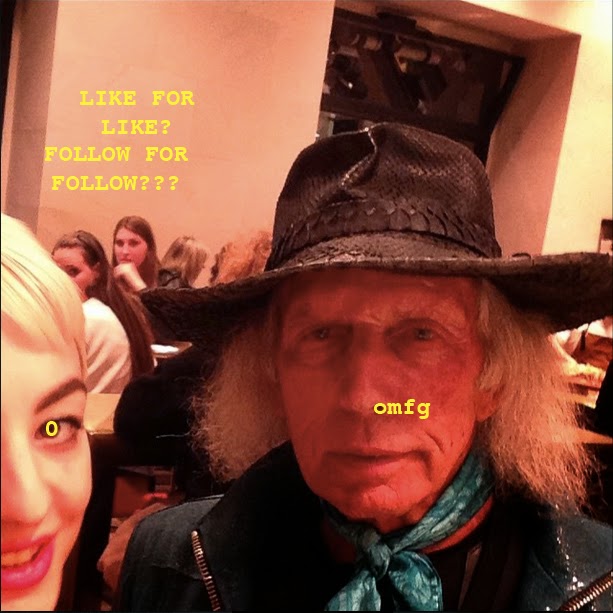 Marni was the only other brand to get me in and I wrote about it HERE . My favorite part of the show was before the show, when I got to creep on models smoking in the window. 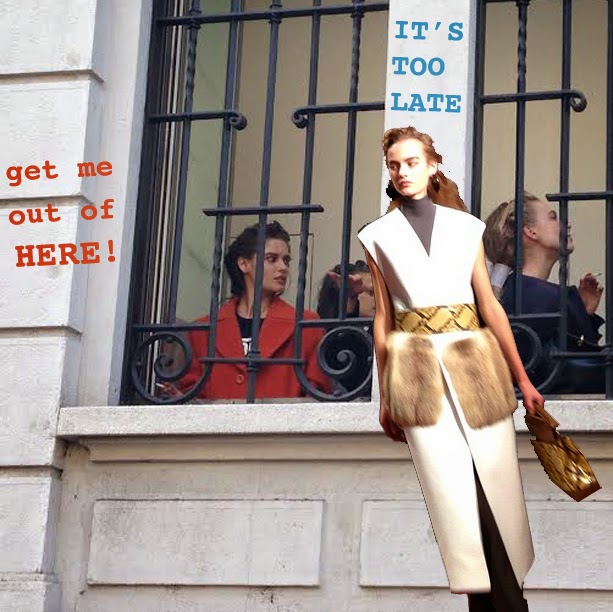 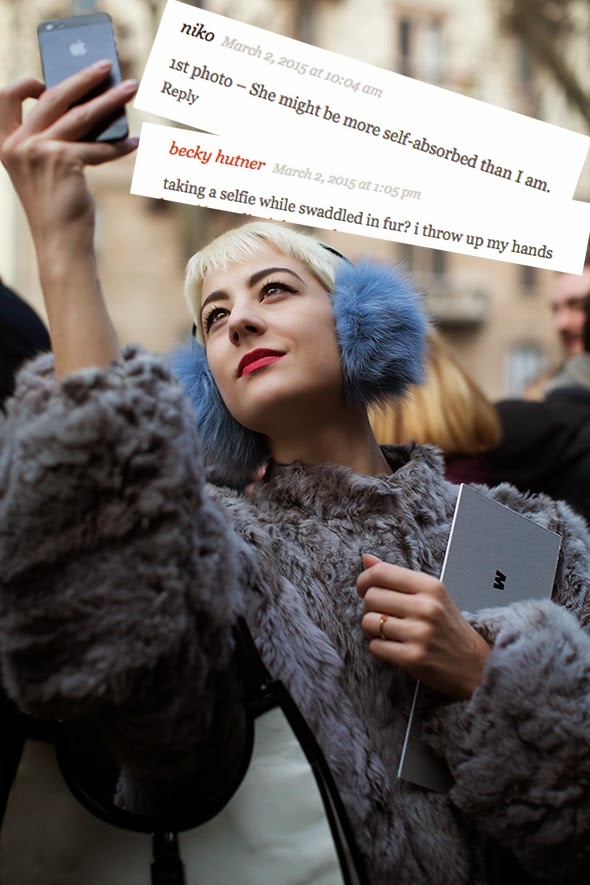 There's a new party in town called TOM. I got into a fight with an old man there. Well, my man had to fight him for me. OK, they didn’t actually fight, because hitting the elderly may send you to prison. What happened was this ancient dude I know through ex-friends walked up to me and said some real nasty crap and I started crying, mostly because my feet hurt but also because it reminded me of the shitty company I used to keep out of extreme loneliness and despair. Desperate times call for dumbass dudes! Anyway my boi trash talked him and the bouncer split them up and we left very dramatically, which was good for my personal brand. After, I saw the Malibu 1992 presentation, which was fun because I got to pretend I was one of the models for like a second. 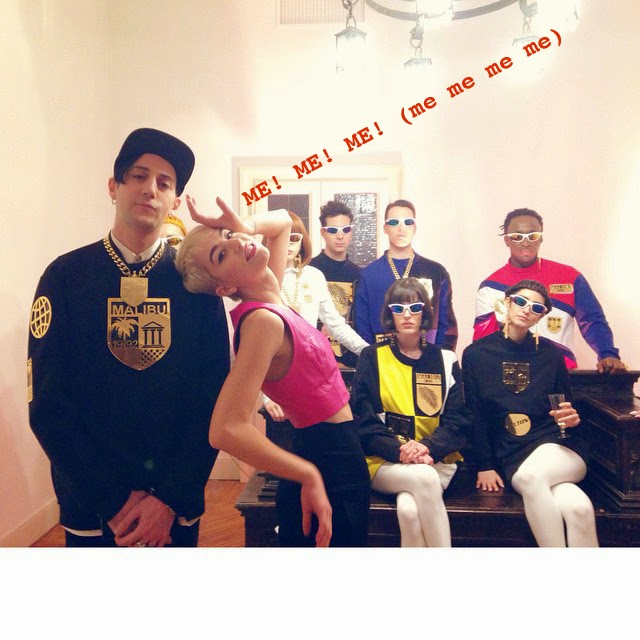 The designer Dorian used to work for Plastic, where everyone went that night. The #legendary club has been around since before your parents even boned each other. It’s the type of spot you’d see a retired mobster and fashion school student making fun of Stefano Gabbana together. Any celebrity, musician, artist or drug dealer passing through town stops there. It was a second home to me, though I’ve gotten kicked out many times. After paying off the county for over ten years and putting off the inevitable, they had to change locations last year, which killed the magic. But, there are still amazing DJs and bowls full of chips! I stayed until closing  at six, ate late night gluten and told all my enemies that I love them. I do love them, though.

As a reward for defending my honor at TOM, I took my husband shopping with his money. We went to Frip and I sat watching him change for five million minutes. I passed the time by taking selfies and writing notes on my phone. During that time, someone lifted my purse, with our keys, his phone, our cards, my makeup (!!!) and last few tampons in it. (Thank god there were still no invites inside, right?) We spent the day panicking, breaking into our air bnb, begging friends to buy us dinner and also lend us money. That evening, the purse was found at the police station, with everything still inside. Maybe the robber was disappointed by the condition of my vintage Gucci. 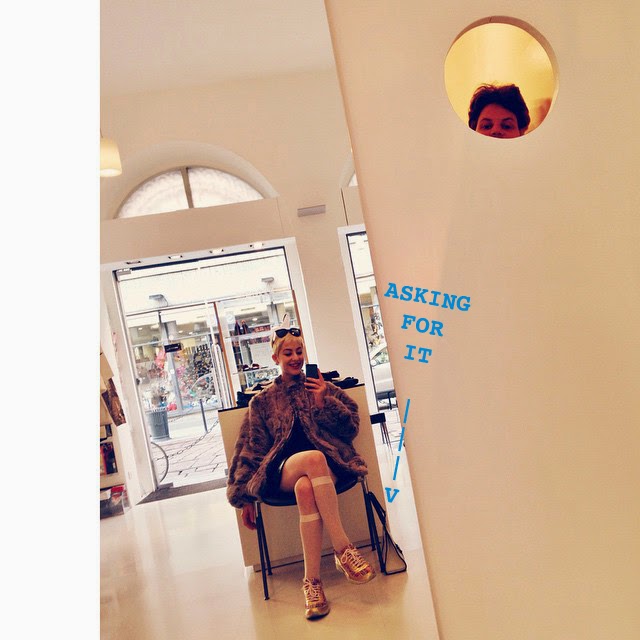 Fashion began in Italy and that’s where it will stay. All the biggest brands were born here and they will survive here for as long as they can evade taxes. Though I regret not seeing the new fashions, I FELT them everywhere. The bakers at the pasticceria were wearing thigh-high latex boots behind the counter, the aristocratic pharmacists were handing out pills with embellished gloves! (You've got to stock up on Aulin when you're there, it's like over the counter Oxy.) The tram drivers had fur back pockets to keep their butts from getting sore. I’m not sure what pick-pockets wear because they were too fast to see, gone in a flash like skinny pants will be.