REASONS TO BE A 'WOODEN PUSSY'

Italians have a term for bitchy, frigid Italian women: 'Fighe Di Legno' or 'Wooden Pussies' (LOL, right?). I wrote about why we should all be FDL, for Vice Italy :)  Here's the English version: 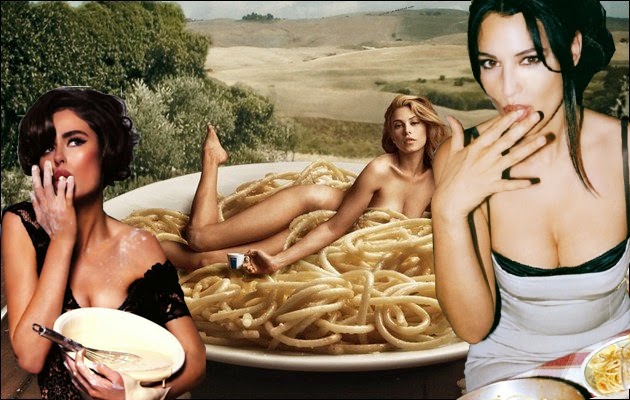 What’s the worst thing you’ve ever been called?

Testa di cazzo? Cretina schifida? La regina delle Olgettine? It may be hard to choose. Insults are an Italian passtime! Throwing them around comes as naturally as offensive hand gestures in traffic. You shouldn’t take Italian insults personally or react to them. I’ve been told that, after being insulted by Italians. Still, while a girl can get used to being called ‘rincoglionita,’ she’ll never shake off ‘Figa di Legno’.

A few sites asked me to trash talk Italian women. Long past the clickbait trend, they hoped I could explain why they’re hated. They wanted the article so badly they threw themselves at me, like desperate sluts! I resisted, heroically. I didn’t want to alienate the only people who don’t hate-read my Italian articles. Besides, I wouldn’t know what to say, since it’s not true that they’re hated. (The women, I mean; there’s no question about my writing.) The only people who think Italian women ‘rompono le palle’ are Italian men, and that’s their own damn fault.

Everything became clear when I returned to Milan for fashion week. When I lived in Italy, I only thought of myself in relation to Italian men, and you know how that went . Now, as an objective observer and non-single person, I could sit back and see it: Eligible Italian Bachelors (25-55 y/o party promoters, web editors, tax lawyers, sandal designers, soap sculptors, football hooligans and gamblers) pick up foreign models and study abroad students, while Desirable Italian Ladies (18-35 y/o stylists, waitresses and [thin] food bloggers only, please) roll their eyes and post photos for foreign followers to get off on. (Some of these girls are dating the dudes picking up NABA students on the side, but we’ll get to that later.)

Between fashion shows , I begged old friends for gossip. The gays had juicy scandals to spill but my girlfriends could only lament. “Nothing happened this year. For months, a guy strung me along on Whatsapp after fucking me a few times…I couldn’t even rely on his emojis.” My straight male friends also complained. “I went out with an Italian girl recently and she immediately broke my balls. I prefer girls from London or Sweden or Asia. Here, they’re all fighe di legno.”

Why are Italian women SO difficult??? With age comes wisdom, and with wisdom comes the ability to realize I’m not an expert on an entire nation of people [anymore]. I asked for help online! Italian girls had a lot to say on this issue, because it’s been an issue for them since they could walk.

“The figa di legno is beautiful and always perfumed. A personal wipe is more likely to get into her pants than you are.  She lives in a big city, can wear heels or be at a rock concert-it's not her look but her ability to make you miserable. Is she the winner, the one able to control men, or is she just a hypocrite? Nobody knows. You want some advice? Get her drunk. All of them! The fdl won't even give up then. " Thanks, Maria Roberti, that was eloquent!

Online boys had thoughts they wished to keep anonymous, which is a shame, since the quotes are perfect for OKC. “If a girl is cool she can’t be a figa di legno. A girl from Bocconi is a figa di legno. She’s a rich loser. She comes from a religious background and is highly involved in the estabalishment and never had problems.” That’s interesting, coming from a Bocconi guy from a religious background who works for the establishment! *strokes chin hair*

“A FDL is a beautiful girl, a 10/10. An ugly girl can’t be a FDL because she can’t get cock. She’ll take anything.” Really? I used to be quite unattractive and I certainly did turn down that one guy who asked to fart in my face!

As the mens’ FDL definitions grew increasingly specific and bizarre, it became clear this isn’t about sex. This is about an ideal woman that doesn’t exist. Italian men expect the impossible from their women but yell ‘DEMANDING!’ as soon as a woman asks anything from them. It’s funny, because Italian girls don’t ask for much. In fact, they overlook a lot. Many don’t even expect you to be faithful. Many accept your infidelity as an unavoidable character flaw. They may ask more than an American-Croatian girl does, but that’s only because we’re just content to survive without diabetes or bombing! You know who the real rompi coglioni are, right?

Italian boys are raised in a culture where women are expected to focus all their effort on their kids, so sons grow up expecting any woman in their life to do the same for them. Meanwhile, daughters grow up knowing what’s coming for them. Even young girls know how Italian men are. They have fathers, brothers and schoolmates who are either sexist hypocrites or sympathizers.

“But, Italian men care about their women more than anyone else in the world! Do you see how many flowers men buy here?” That’s a real argument made by a successful editor I won’t name, for your sake. Respect isn’t the same thing as abstract adoration, couldn’t be farther from it. Anyway, they’re only buying flowers because they fucked up.

If I had grown up in Italy, I’d probably be a FDL and my life would have probably been easier for it. Italian women are onto something. We should all be fighe di legno! 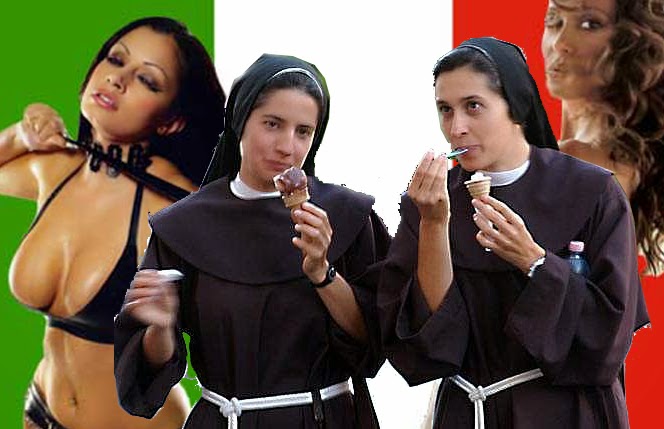 REASONS WHY EVERYONE SHOULD BE A FIGA DI LEGNO

1) Better Safe Than Sorry
You can’t imagine how many horrible men I have to be nice to just because of the abundance of naked pictures they have of me. I’m not embarrassed of my nudity but there was a period in which I was kind of chubby and had bad skin, on my butt. You aren’t free until you’re free to burn bridges.

2) Star Treatment
Chiara Ferragni just became the first ever blogger to get a Vogue cover, ever! I ran into her in Tribeca once—she was drenched in designer clothes that don’t even exist yet and had adoring fans running after her. Maybe the LESS you give to the world, the MORE it will reward you.

4) The Grass is Meaner on the Other Side
I was always the opposite of a FDL and I still didn’t win. Men still hated me. Do you know why? Because I was a ‘cagna’. Men will hate you regardless of your actions! You may as well have the upper hand when they do.

“It’s crazy how many slang words Italian has to criticize the sexual life of women: you can be either a figa di legno, cagna or a rizzacazzi. I found out about that term a few days ago, because a guy called me that for posting a pic with some cleavage. After he liked the picture, of course.” Claudia Pasolini, via Facebook.

5) Lying is the Most Fun a Girl Can Have Without Taking Her Makeup Off!!!
The best part of being a FDL is constant re-branding. Figure out what everyone’s personal definition of FDL is and go with it! It doesn’t have to be true. You can actually have as much easy sex as you want with people you don’t care about, but if you’re interested in a guy, be a total nightmare! Demand unreasonable shit! (Like that he listens to your stories and asks you questions.)

6) Good Apple
Fige di legno come from trees, so it’s no surprise this metaphor makes so much sense: 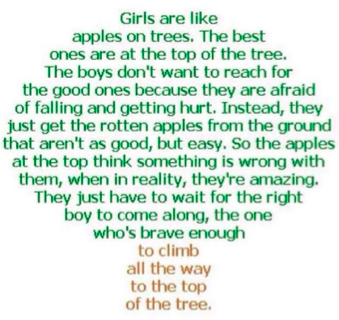 7) Productivity
If you act too easy, you’ll end up taking care of a man and even the best ones have issues. Living alone means not having to clean up after anyone and even landing on Vice! Did you know Italian girls are going to school more and more successfully than italian boys? Did you know most Italian women say they’re more satisfied as working mothers than housewives? Women are owning classicly male roles so why can’t men touch ours? Italian men barely contribute to housework and childcare, even if their wives work full-time. Sure, this can also be said for America men,  Croatian men and probably whoever lives on that planet similar to Earth . All women face this problem but Italian women have started avoiding the problem by not letting the men have a chance to burden them in the first place.

8) No Regrets
I used to think being nice was the most important thing in the world. I didn’t like myself much for a while, so I did whatever I could to make others like me. I bent over backwards (literally and figuratively) in order to make myself as easy to get along with as possible, especially in male company. I’ve recently realized being nice isn’t that important at all. Being powerful is important and many times being nice is exactly the opposite of what you should do to get there. Girls do lots of things to avoid seeming ‘mean’ to boys. They let them tease them in school, harass them in bars, go further than they want to in bed or even fake orgasms. I wish I had been meaner to men. Not doing so is my only regret. The male ego is more fragile than ours but that doesn’t mean it’s more important.

Looking back on my past, writing a memoir nobody wants to publish, I saw that my insecurity drove me to let men hurt me and fige di legno do the exact opposite of that. Italian women, in general, do the opposite. And that’s cool.